Liberated and liberal, as an Aquarius, you like to push boundaries and challenge the status quo by using your strong intellectual mind and futuristic approach to problem solving. Expressing individuality, having freedom, experimentation and social justice and reform; these are all important to you. This combination of qualities is very powerful, as it is about breaking away from the traditional or restrictive systems and focusing on new concepts and ideas. You may be torn between doing things as an individual or in a group, but really you just need to figure out which one works best for which project or idea. Sometimes doing it all yourself is ideal, at other times, you must ask for assistance.

Ruled by Uranus, the planet of awakening, surprise and revolution, Uranus opens up opportunities, often with a jolt, to get our attention. This suddenness is used to metaphorically close one door, whilst opening up another. It is essential that you trust in the forth-coming fortuity and not wander around disillusioned when certain things don’t work out. Aquarians are full of surprises and always on the look out for ways to do things better, not just for self but for society.

Humanity, group involvement and social interactions are part of your nature, with volunteering or membership of a cause, manifesting your ultimate altruistic psyche. Intently developing ideas and then applying them for the betterment of humankind. Your mind holds no boundaries but remembering the outer world does have restrictions, is a good lesson.

With all this electrical energy, you can be quite eccentric and rebellious and will act in intense spurts of activity, but your mind will never cease. You are highly intelligent and are fascinated with anything unique, bizarre or non-traditional. It’s the scientific part of your brain that will thrive, questioning ‘why’ and utilising the element of surprise to come up with wonderful and creative opportunities or ingenious discoveries for the greater good.

Certainly different, innovative and original, the Aquarian challenge in life is to integrate both heart and mind, feelings and analytics. Because your thought patterns are so different, so unique, you can be easily distracted with ideas and concepts which are external from or outside of the mundane, earthly plane. It is important to put equal amounts of energy into the daily routine of life, as you would put into that exciting invention or theory.

By harmonising curiosity (self) and compassion (others) or tangible logic with intangible potential, you may find that the possibilities really are endless because they become grounded in reality. Becoming aloof or alienating yourself in order to break free or move beyond limitations, means you may lose sight of the value of social structures and other individual’s influence. Working within a framework of social order, can in fact enhance your radical visions, making you truly an agent of great change.

The chart analysis of Ellen and Oprah reads almost like a mirror image of one another. Both are Aquarians who have smashed through societal conformity and who encourage reform, not just in race, gender and sexual orientation, but in many other areas of humankind. 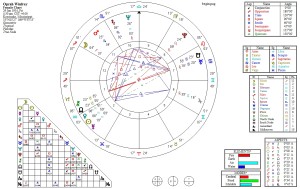 By using their intelligence and genuine compassion, they have been at the forefront of expressing their own individuality, whilst pushing collective change in attitudes and ideas, as well as bringing people and community’s together, through a medium that suits futuristic and progressive Aquarian – television and online media. 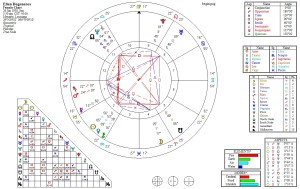 Seemingly non-judgemental and tolerant, both women have honed their communication abilities to appeal to a mass audience; the difference here is that Ellen has more of a Sagittarian energy with her comedy, optimism and open generosity. Where as Oprah is influenced by more of a Scorpio flavour, with her need to delve into the depths of the human psyche and behaviour, and also her ability to cut through any dishonesty or untruth. But clearly, both are originals; destroying old concepts and awakening higher consciousness.

Both have not been afraid to be experimental or take risks, but both have been grounded in their approach and vision by a strong 2nd House and a some what Capricornian ambition.

Finally, the ultimate in altruistic Aquarian behaviours; both Oprah and Ellen are renowned for their philanthropic endeavours and charitable causes. Both are equally passionate about the ‘group’s’ they belong too and are equally generous towards those who need it most.