If your Sun is in Aries you are passionate, pioneering, driven, active and impatient. You need to find a constructive outlet for your high- level energy, but when harnessed skilfully, you mostly strive to be true to yourself, assertive with others and independent. You can be accused of being competitive, but it is not about winning over other people, more about getting places quickly (literally and metaphorically), without limitations or blockages. “NOW, I want it now”, is often an Arien catch-cry! It is this go-getter attitude that will inspire others to also be independent and self-directed.

Aries is considered the infant of the zodiac. The first sign of the 12 zodiac signs, the Aries approach to life is like seeing everything for the first time, making Aries spontaneous, enthusiastic and passionate. The challenging side to this is that Aries can also be childish, naive, selfish and may operate from a singular point of view, sometimes forgetting that others have needs, wants and opinions too. It is this eagerness to manifest their own potential that may find some Aries initiating action prematurely or unskilfully. Aries also tend to stick with something, even after it is long past being useful or helpful. They can sometimes try to get ‘water out of a dry well’, much to their detriment, particularly in relationships. Or alternatively, they will be over-enthused by something for a short amount of time and then drop it or forget it quickly, when the initial interest wanes.

Ruled by the planet Mars, consider the Great Warrior, the Mars function is to take risks, push forward with ideas and support an individual outlook. It is a masculine energy and is vital in the grand scheme of the universe in terms of learning how to be assertive without being a bully, learning to be independent without being selfish and to integrate and express feelings of anger or frustration without violence or intimidation.

One of the most famous Aries is Elton John. Certainly pioneering and at times infantile, Elton John’s fame was no doubt initiated by his independence and uniqueness as a performer. His ability to not give a damn about what people thought, drove his success, all very Arien qualities. But is he a true Arien? 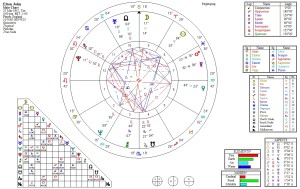 I believe he is an honorary Leo. With his over-developed need to be centre of attention, his precocious nature and ability to find his stage, the planets and aspects in his chart all point towards a natural Leo inclination. There are two main things that stand out to me from his natal chart; firstly his overly fixed modes. When someone is fixed, as many Leos tend to be, they are generally not able to start or initiate a concept or idea, however, they have the ability to take a concept and idea and make it 10 times better, sustaining and persevering with what has been started. Elton John’s relationship with his songwriter friend Bernie Taupin was essential to his success. Bernie Taupin created the songs that Elton John manufactured into hits. As an honorary Leo, Elton John needs to be centre stage at all times and Bernie Taupin allowed him to do this.

The second key portion of Elton John’s Leo-ness, is his huge ambition highlighted in the house of fame, creativity, extraversion and performance, the 5th house of Leo. Also his Ascendent is in Leo. (Read Leo here to find out more)