The Cancerian Sun sign represents all things nurturing. It is the traditional representation of Mother and the ultimate feminine principle. Belonging, protecting and sensitive emotion are all quintessential in the makeup of Cancer. Empathetic to a fault, Cancer is the ultimate maternal archetype.

If you have a strong Cancerian influence in your chart, personal and emotional security are vital to your well being. After the heady mode of Gemini, it is at this point in the zodiac that we move into the heart of things and surround ourselves with feelings. A typical Cancerian will be caring, warm and sentimental. They will be able to tell you how they feel in a situation, how the ambience felt, what the general feeling was around them. This heightened sensitivity can sometimes mean that emotion and feeling are stronger than logic and can lead to suffering and insecurity.

Ruled by the Moon, they literally feel the moon’s orbit, controlling their psyche. Sometimes accused of being moody, Cancerians are just dictated by the Moon’s constant flow through the signs of the zodiac. As the most regular moving celestial body, the moon will spend 2-3 days in one sign, before moving to the next. As the Moon has the strongest gravitational pull on the Earth, the energy around it’s cycle is not only intense for everyone on the Earth plane but Cancer will succumb to it’s influences the most. The Moon is a restless, subconscious planet, and often Cancerians find it difficult to sit and be with themselves. Because they are ‘outer-directed’, they are too busy wanting to be in tune with others, doing things for others, sacrificing for others, nurturing others, that they have difficulty giving or nurturing themselves and can feel unappreciated or undervalued. This dependency on belonging can manifest unskilfully and many Cancerians can find themselves living through others, feeling like it is better to belong to a negative situation than not belong at all! The key here is belonging to self, expressing and experiencing your own feelings rather than everyone else’s. Cancerians must learn boundaries; where do I end and others begin.

Cancerians are home-makers, devoted to caring and sharing. Many are terrific cooks and have a love for food that is second to none. They can be very dedicated to family or the family of friends. Regularly I find people who do not have Cancer as their Sun sign but have a strong Cancerian influence and this reveals itself in exactly these two qualities.

Although sometimes traditionally considered fragile or fainthearted, Cancerians have a tenacity and resoluteness that is unmatched. Much like the water that creates the gorge, Cancerians can hold onto objects, hurt feelings, negative patterns and traditions, long after they are useful. This doesn’t mean they are not inclined to take two steps forward and then one step back before holding onto whatever it is that they feel is worth investing emotional energy into. Learning to let go whilst still honouring your feelings is very important.

No doubt one of the most famous Cancer Sun signs was Princess Diana. Extremely sensitive, exceptionally caring, and devoted to her children and ‘mothering’ to her adoring public, Diana epitomised the Cancerian embodiment of nurturing and warmth. However, Diana is most certainly an honorary Aquarius. Known for her social conscious, altruistic nature and humanisation of the Royal family, Diana smashed traditional structures and became a true agent for change and collective reform. Aquarians are progressive and at times rebellious and certainly Diana was much tougher than she appeared, especially later in life. The tenacity of the Cancerian coupled with the individually of Aquarius helped shaped Diana’s approach to life. She embraced defiance and pushed boundaries, while still remaining accessible, with an open vulnerability. 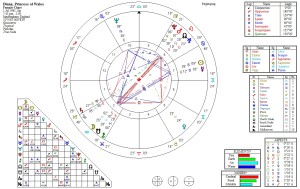 Diana used Astrology as a tool to help her manoeuvre through life, however she was quick to dismiss anything that she didn’t believe was realistic or achievable. Sensitive signs like Cancer relate well to Astrology as it taps into their intuitive natures whilst lending clarity and objectivity to subjects that their surging, watery, sometimes ambiguous minds grapple with. Yet Aquarius are the analytics, using the logical and objective qualities of Air to come to their conclusions. Diana was certainly a mixture of both.

Interestingly, like Gemini Marilyn Monroe, Diana’s sudden and early demise is indicated in her 8th house (death and rebirth), which is packed with Uranus (the planet of surprise or sudden experience), Mars (the planet of violence and attack) and Pluto (the planet of destruction and renewal; repression and transformation). (Read Aquarius here for more information)