Capricorn stands opposite Cancer (the Mother archetype) and thus represents Father; discipline, authority, duty and the provider. A typical Capricorn is interested in striving purposefully towards a goal, in an organised, respectful and habitual way.

Tradition is very important to Capricorn, as in ‘keeping with tradition’, it reveals Capricorn’s ideas about public identity, social standing or influence. Material wealth is also an important measure of success for Capricorn.

Known for their exceptional work ethic, they can put Virgo’s to shame, but it is Capricorn’s ambition that sets them apart from the other Earth signs. Ambition is what drives them and is as natural an instinct as patience and consistency. They are planners and strategists, always with a long term goal in mind.

The planet Saturn is Capricorn’s natural ruler, and this fit between planet and sign is a powerful coupling. Saturn is considered the task-master of the zodiac. This planet asks us to build structures, organise systems and make calculated risks based on lasting outcomes. Heavy stuff. Saturn’s function is to simplify our lives by dissolving things we hang onto. But it also wants to be in charge, with boundaries and limits set – above all it wants us to be realistic and prudent in our quest.

In the early years, Capricorn can be judgmental or rigid, particularly if someone doesn’t share their ideas or values around ambition and tradition, but as a general rule, Capricorn ages like a fine red wine. Later in life, past the Saturn Return stage (ages 28 through to 32), Capricorn can become tolerant, intuitive and accepting, caring less what others think and more about what pleases themselves. Make no mistake, they will never be frivolous or flighty or completely without logic, but their natural competitiveness will ease, and they can become quite delicious, often with a dry sense of humour.

Capricorn can at times be blinded by attainment, with a singular focus on societal judgements or image consciousness. They can at times be fraught with ‘shoulds and oughts’.
Capricorn must learn to set their own limits and boundaries and not get caught up in what others think, particularly family members. The key for Capricorn is to develop their intuition and have faith in the ‘higher order’.

During a Saturn Return phase, which we all have in our life time, we will learn introspection and understand that Earthly pursuits and honouring nature will ground us. This planetary transit is vital in transforming us into ‘true’ adults, by learning from the mistakes we have made, reappraising our behaviours and restructuring goals and paths. These are all very Capricornian traits. (Read more about Saturn Return here)

“One night President Obama and his wife Michelle decided to do something out of routine and go for a casual dinner at a restaurant that wasn’t too luxurious. When they were seated, the owner of the restaurant asked the president’s secret service if he could please speak to the First Lady in private. They obliged and Michelle had a conversation with the owner. Following this conversation President Obama asked Michelle, “Why was he so interested in talking to you.” She mentioned that in her teenage years, he had been madly in love with her. President Obama then said, “So if you had married him, you would now be the owner of this lovely restaurant,” to which Michelle responded, “No. If I had married him, he would now be the President.”

This struck me firstly, because I knew that Michelle Obama is a Capricorn, but secondly that it resonated perfectly with the Capricorn archetype. Even if a Capricorn themselves is not overly ambitious or striving for higher goals, they will support their partner to ensure they reach the mountain top.

The famous chart I chose to interpret instead for Capricorn, is Michael Schumacher. A hugely ambitious chart, Michael Schumacher is a Formula One (F1) driver who won 7 championships during his career. His chart has a large amount of Earthy energy, which speaks of resilience, persistence and grounding and usually the astrologer would look for equal amounts of elementary Fire energy in someone with a career like this. The Fire/Earth combination is a forceful, risk-taking and motivated blend, but Michael Schumacher is lacking Fire in his chart. However, it is his strong Cardinal energy that actually pushes his Earth to take control and push his ambition forward. 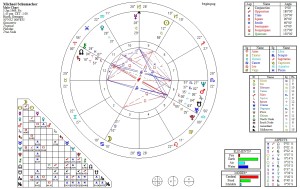 With a packed 6th House, naturally ruled by Virgo, this is a major theme in his chart, indicating a extremely strong work ethic and a perfectionist nature. Stellium’s (a cluster of planets) are thought to denote a heightened focus where they fall and are generally used advantageously by the individual when there is an opposing energy, in this case, Saturn in Aries. As I spoke of earlier, Saturn is the planet of hard work, longevity and review and Aries is an independent, initiator so the astrological conclusion can be made that this stellium is a snapshot into his problem solving and practical attributes, as well as his pioneering, focused and solo attitude towards his job.

F1 driving is methodical, calculated and perfecting thus Michael Schumacher is known as the most technically correct driver that may have ever been. This is an incredibly focused, specific and disciplined career, which requires the perfecting of a passion over a long period of time. This suits Capricorn well; gaining palpable success and respect is vital for Capricorn’s, even if it takes years. He has most certainly reached the pinnacle of success or the top of the mountain that most Capricorn’s are striving for. Notoriously private, Michael Schumacher prefers to let his career and achievements speak for themselves.