Dear Leo, the world is your stage and it is this ability to draw others in, that is key to mastering the ego and ‘taming the lion’ so to speak. When the Sun shines, Leo’s are warm hearted, generous, magnetic and gregarious. Just don’t put a cloud in the sky or encounter a Leo on a solar eclipse, then you will find them moody, melodramatic, dogmatic and overbearing.

Loyalty is paramount in Leo’s set of virtues and they love to lead by example through confidence, and inspire by creativity in thought and  deed. Lively and warm, Leo’s shine when appreciated and noticed. A compliment to a Leo is as basic a need as water and food, they live for it. Enthusiastic and inclusive, the true Lion believes in equality; within the sexes, classes, races and denominations. Except for them…Leo usually thinks they are above it all. Skilfully used however, this tendency for being totally self assured and liberal will take form in a way that is caring, excitable and encouraging, without being arrogant or egotistical. Often cast as (and auditioning for) the role of show-off, truthfully Leo’s want to celebrate others and support expression. They play well at living life.

Ruled by the Sun, when they work they work, when they play they play and when they rest they rest, seldom doing anything by halves. Full with the exuberance of life, the Sun ruler is the perfect fit for Leo’s positivity, dynamic nature and persistence. Actively supporting personal potential, Leo’s illuminate originality and creativity. Leo’s are reminiscent of a hot summer’s day; freedom, joy, entertainment, vibrancy and consistency. A born romantic, love and drama go hand in hand, but the quest for Leo is individualisation. Carl Jung, himself a Leo, found the inner journey for individual wholeness and conscious awareness a particular fascination, developing his psychological theory of “Individuation” around this idea; advancing into the core of who you are.

Although vanity and pride can be Leo’s downfall, they represent the child paradigm and rule the area of children. They can be rollicking and playful and sometimes childish, but a Leo is one of the few signs that remembers being a child or adolescent vividly. They can provide excellent insights into how or why a child behaves or what a child may be thinking because mentally, they are still right there with them.

A large number of famous actors, musicians, celebrities, royalty and top politicians have Leo in their chart. Either as their Sun Sign or located in their MC Sign (representing career), in their Moon Sign (representing drama, storytelling, caretaker) or their Ascendent Sign (first impressions, the ‘mask’ we may wear)

Barack Obama, is a Leo. His leadership qualities, charisma and persistence are well documented in his chart. A number of planets and points in Leo, Obama is certainly a powerful force. However in astrological terms, we would consider him a reserved Lion rather than a gregarious one. He is able to own his stage and hold his audience; able to draw people into him with his inclusive nature and quiet enthusiasm. He is liberal and egalitarian and clearly his early years as a teacher stem from his Leo roots. But there are several other factors in Obama’s chart that make him a very different president to say someone like Bill Clinton, also a Leo. 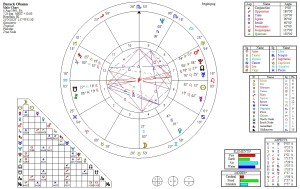 Barack Obama has a strong Aquarius influence first and foremost, coupled with a strong 6th House. Aquarius represents social conscious, reform and a person who is futuristic and ahead of their time. I would interpret his chart like this; in public he is a Leo, born star, leader, influential, self assured. In government meetings or at the office, he is Aquarian, a born analyst, highly intelligent, humanistic, progressive and socially just. Bringing these attributes together under a 6th house influence, he is all about serving the public, being dutiful and humble, working hard and upholding values.

In private, he is loyal, caring and loving. Despite his top job, he still manages to balance his home life and ensure his family are provided for both materially and emotionally. I would say Barack Obama is an honorary Aquarius and Virgo and it is this flow of energy between these two signs and three elements that makes him such a magnetic, forward thinking, man of action.